Thabo Mbeki’s latest attempt at historical revisionism falls horribly short of the legal mark. The former President published a letter on his Facebook page last week entitled, ‘Behind the narrative of the abuse of state power was a larger goal’. In revisiting – nearly a decade after the fact – his notorious decision to remove Vusi Pikoli from his office as National Director of Public Prosecutions (NDPP), Mbeki has re-opened the proverbial can of worms. He seeks to refute the widely-held view that he unlawfully intervened with the functioning of the office of the National Prosecuting Authority (NPA) by seeking to prohibit the arrest and prosecution of the late former National Commissioner of Police, Jackie Selebi.

The essence of his argument – bolstered in part by selective reliance on the ‘Ginwala Report’ of inquiry into the decision to remove Pikoli – is that were the warrants for the search, seizure and arrest operations in respect of Selebi to have been executed within a week from being obtained as Pikoli intended, a ‘national security crisis’ would have ensued. Mbeki claims that additional time was needed to smooth things over between the Scorpions (DSO) and the SAPS, given their ‘poisoned relations’, to prevent what he anticipated would be a ‘shooting war’ should the warrants have been so executed. He cites the vague notion of ‘national security’ repeatedly in defence of this position. Doing so, however, does not magically change the law.

In the coming weeks, the North Gauteng High Court will decide whether the decision to drop charges against Jacob Zuma in March 2009 was lawful or not. So, given the distinct possibility of the State being required to make a decision about whether to (re)prosecute the current President, a brief refresher course in the relevant law seems appropriate…. 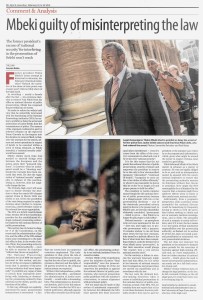