In a unanimous judgment of the Constitutional Court handed down 25 April 2018, Lauren’s research on rationality review was cited with approval. In her article, (Lauren Kohn ‘The burgeoning constitutional requirement of rationality & the separation of powers: Has rationality review gone too far?’ (2013) 130 South African Law Journal 810), she argues that the judicial tendency to expand the principle of legality-cum-rationality to include those typical review grounds reserved exclusively for administrative action under the PAJA, and in the absence of engaging the separation-of-powers concerns, is a dangerous affront to the doctrine and thus to the courts’ vital place within our system of government.

The abstract to her article is as follows:- 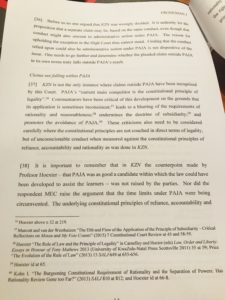 This article presents an analysis of three recent judgments of our apex courts which collectively illustrate a maximising of the ‘minimum threshold requirement’ of rationality through the seemingly inexhaustible principle of legality. The question sought to be addressed is whether, in extending this baseline requirement to cover procedural fairness, reason-giving and something akin to proportionality, in the context of non-administrative action and in the absence of any meaningful engagement with the doctrine of separation of powers, the courts are going too far. In addressing this question, the article proceeds as follows. First, the tenets of the doctrine of separation of powers are examined, and in particular the theory is juxtaposed with the usefulness of this doctrine in practice. The role of the judiciary, notably through judicial review, is highlighted as the crucial ‘check’ against abuses of state power which gives this doctrine its lasting relevance. In examining how the courts ought to strike the ‘delicate balance’ in exercising their power, the paradoxes inherent in judicial review and its defensible limits are explored. Against this backdrop, the rationality requirement is elucidated and juxtaposed with the more searching requirement of reasonableness. Finally, the analysis of the case law reveals that although the conclusions reached are to be hailed, the courts’ failure to engage meaningfully with the prescripts of separation of powers in expanding the frontiers of rationality review, is indicative of a worrying trend that may ultimately compromise our courts’ crucial institutional integrity.

Link to full judgment: Pretorius and Another v Transnet Pension Fund and Others CCT95/17 [2018] ZACC 10